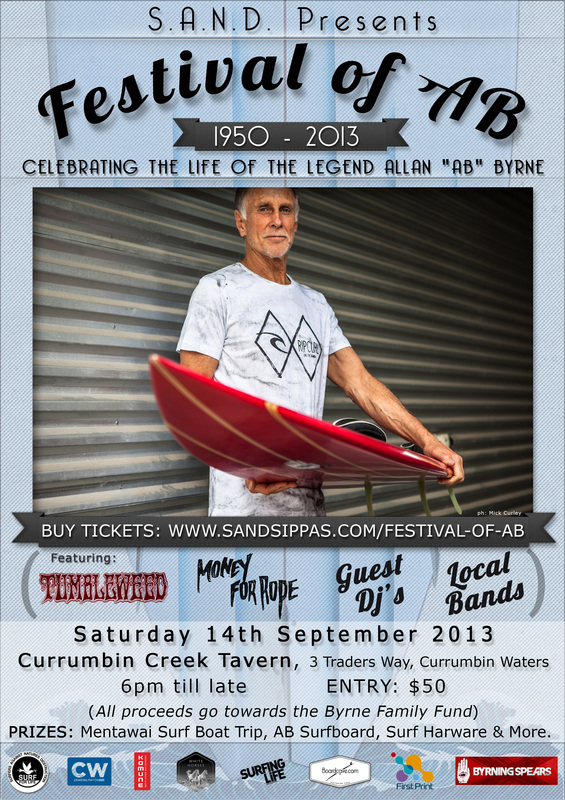 The Festival Of AB 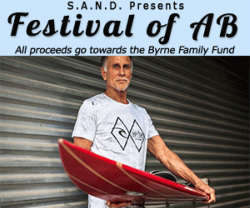 AB passed away two weeks ago after a motor cycle accident while in Bali to compete in the Rip Curl Padang Padang Cup. AB was renowned for his six-channel concave surfboard design and his tube riding. AB’s second place at the 1981 Pipe Masters was just one highlight of a life spent getting barreled in Indonesia, Hawaii and the Gold Coast, where the New Zealand-born surfer had lived since the 70’s. AB had shrugged off ill-health to surf Padang Padang with only three other competitors in the water -- a typical move for a man who celebrated his 60th birthday with a tow-in session at a 20-foot-plus Hawaiian reef break. Because of existing health issues AB wasn't insurable. As such, the immediate cost of bringing him home to rest has placed unnecessary financial strain on his family at a most difficult time.

SAND will host ‘The Festival Of AB’ at Currumbin Creek Tavern featuring Aussie rock legends TUMBLEWEED supported by Melbourne’s MONEY FOR ROPE with more top local acts to be announced. The event will also boast guest DJs, giveaways and raffles including a brand new AB hand shaped board -- one of the very last to leave his factory -- and an Mentawai surf boat holiday courtesy of renowned sea caption Tony 'Doris' Eltherington.

Wollongong’s Tumbleweed inspired a whole generation of music lovers when they emerged in 1990s from the seeds of the Proton Energy Pills. Tumbleweed gained infamy courtesy of a national support slot to the one and only Australian tour by Nirvana back in 1992, and their rock psychedelia was a defining sound of the decade for many Aussie music fans. Reforming in 2009 to play Homebake, Tumbleweed has since played Big Day Out and headlined Melbourne’s CherryFest. To seal their triumphant return, the band’s first album of new material in fifteen years, Sounds from the Other Side, will be released late September.

Money For Rope’s impressive debut self titled album dropped in 2012 and has received considerable airplay on alternative stations like Triple J, but it’s the live shows the band are best known for. Money For Rope’s crazed rock‘n’soul surf garage parties can ‘transform a stoic and cynical crowd into an exuberant force on par with the band’s own rabid energy’. The jaw-dropping energy of two drumkits, two guitars, a bass, four voices and keys hint as to why the band has been handpicked to play to thousands of music fans at events as varied as Splendour In The Grass, Cherry Rock, and the legendary Reclink Community Cup.

Due to venue capacity, tickets for The Festival of AB are strictly limited to 400 only.

All proceeds from the event will go directly to AB’s family.

The Festival of AB
Featuring Tumbleweed and Money For Rope

About SAND:
SAND are a voluntary not-for-profit organization based on the Gold Coast that have held surf-related events to raise funds for varies charities and community causes since 1984.
More about SAND here